Call the City Council Board Members

and tell them you DO NOT WANT THIS for Newburgh!

At the April 22nd City Council Meeting, an amendment to Article 7, Special Use Permits was proposed to allow the city officials to circumvent the Zoning Board and grant variances for the development of large mixed use developments along Broadway (between Concord Street and Grand Street, spanning a total of 10 city blocks), that of which is being proposed is a phantom supermarket and approximately 100 low income housing units. 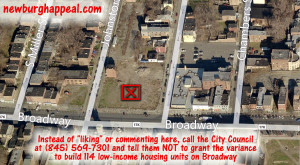 The issues at hand are as follows, the first one being the most critical at the moment:

Call the city officials (The City Council Board Members) at (845) 569-7301 and tell them you DO NOT WANT THIS for Newburgh and remind them its there duty to represent the public’s interest, and not the personal/financial interest of a developer!